Events that are authentically yours

The entertainment aspect of your event is the most key ingredient to its success. Don’t leave it to an amateur. A Professional DJ should provide a stress-free experience, and be an expert in coordinating and personalizing their service to your event.

We take your entertainment seriously. SoundFire DJ is an award-winning DJ service having won the Wedding Wire Couple’s Choice Award from 2016-2020 and The Knot ‘Best of Weddings’ for 2019! With rock solid assurance, integrity, and very high-quality performance standards, it’s easy to see why our customers have such high levels of satisfaction.

Alton, the owner, is the only DJ residing in Northeast Wisconsin to serve on a board of directors for a major educational conference for DJs. This is huge. Not only is SoundFire DJ respected among the wedding community in Northeast Wisconsin, but also on a regional and national level by other DJs for being selected for this honor. Not only was he a board member, but he was also appointed to be the official house DJ for this conference for 3 years in a row! You know you have an awesome DJ when they’re asked to DJ for other DJs.

Alton has entertained audiences in 2 continents, several different countries, and all across the United States. At an early age he began with classical training in piano & flute. Throughout his teens he was recognized as one of the top musicians in the country, in his age group, by being inducted into several national honors ensembles, and in two of these ensembles he held a principal chair position.

He later went on to study music in college under scholarship, and during that time began his service to our country with the 132nd Army National Guard band here in Madison, WI. After a few years he decided to serve our nation full-time as an active duty Army Bandsman. He was stationed in both Norfolk, VA, and Ft. Rucker, AL where he served with the 98th Army “Silverwings” Band for 3 more years. During that time Alton began his interest in DJing as an art form, and even became the unofficial, designated unit DJ for public events where the band was asked to provide pre-recorded music. While serving in the military Alton excelled in his musical accomplishments participating in a vast majority of the ensembles in the unit, performing over 700 events per year, and was recognized by several “top brass” leaders for excellence in musicianship.

We had an outstanding experience and we so glad we chose SoundFire DJ! SoundFire DJ made our wedding reception such a fun and relaxing time. Alton made sure that everything went smoothly whether it was the flow of the music, helping get everyone through the buffet line, personalizing the entire evening, and so much more. We wouldn’t have changed a thing and so many guests kept saying what a great time they had. Thank you SoundFire DJ for making our special night so much fun!!
Deanna & Eric W. 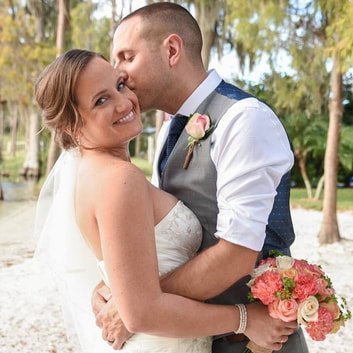 We chose Soundfire DJ because we had a feeling that Alton and his team would be able to help us make our wedding an amazingly fun party for us and our guests, and they did that and much more! The dinner music was exactly what we were hoping for and set the mood of our European theme. And the reception was the epic Italian dance party we wanted! We truly appreciate all the guidance they provided throughout the planning process, the level of detail put into personalizing the reception, and their flexibility and willingness to help with potential issues and changes came up. Our ceremony and reception ran so smoothly. We couldn't have asked for a better night! The SoundFire DJ team was so much fun!
Nicole & Matt O. 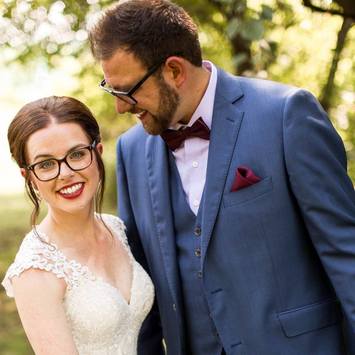 Book Soundfire! Alton was great from start to finish. We met with Alton several times leading up to our wedding. Each time we met with him he was prepared and gave us many options on how to make our day everything that we pictured. Our dance floor had people on it all night, there was never a lull. We have gotten many comments on how our wedding was the most personalized wedding they have gone to in a long time they truly felt a part of our day. We felt as though Alton was truly working to make our day the best that it could be not just collecting a check.
Stacie & David V. 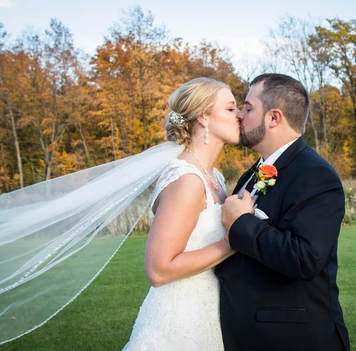 Alton is AMAZING. He handled our entire wedding - outdoor ceremony, cocktail hour and indoor reception. He is so professional and accommodating. His equipment is top of the line, and his personality is perfect. He took the time to get to know us for who we are, and it showed through the entire day. Alton kept the dance floor full while incorporating all the “traditional” dances and rituals. He also helped keep our day special by having us tell him things individually that he brought up during the reception. If you are getting married, planning a party or need an amazing master of ceremonies, I could not recommend Alton enough. Worth every last penny we spent and then some.
Kirsten & Garo M. 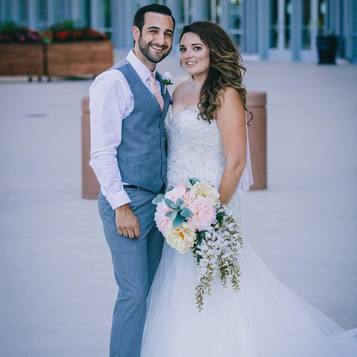 SoundFire did a GREAT job with our reception. They were very instrumental in the planning process and put our minds at ease that evening. It’s nice to have one less thing to worry about in amongst all the commotion that comes with a wedding. We had interviewed other DJ services and SoundFire DJ came across as very professional and showed genuine care with how the night would transpire. They were very accommodating with the music we wanted played, and the lighting turned out beautifully. Don’t just take our word for it, talk to other companies and you'll see the difference. We were ecstatic with what SoundFire had to offer, and you will be too. Book these guys quick, their dates fill up fast.
Ellie & Matt M. 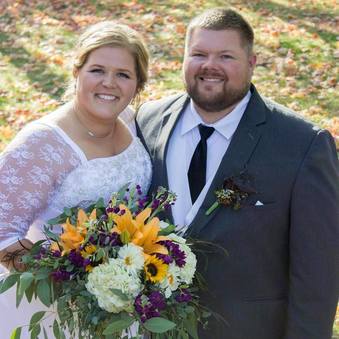 Alton at SoundFire DJ has the utmost passion and drive to make your wedding day the best it possibly can be! He takes the time to get to know each couple individually and personally so that he can relate your love story to your guests in the most perfect culminating moments of your day. Alton goes above and beyond what most people see a DJ’s role as and is more than willing to be helpful in any aspect of the wedding. Through out the entire planning process of the wedding he is the only vendor who would reach out to us instead of us having to reach out to him. Alton has great experience and knowledge in his profession and has great ideas to help make your wedding unique and fun for you and your guests! This is the best DJ you could have for your wedding!!
Amanda R. (pictured with her husband Greg) 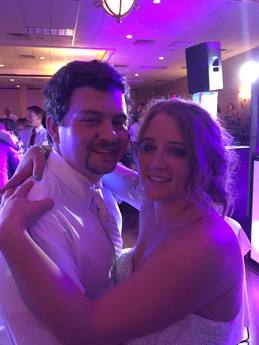 Want to know how much your wedding entertainment might cost?

Want to get started?